Removing Mercury Fillings in our Teeth

An experienced biological dentist can safely remove mercury fillings without exposing you to toxic vapors in the process. He or she is likely to build up the tooth with a porcelain onlay to strengthen the tooth; and place a crown that is free of harmful heavy metals.

Some dentist offices have a Cerec machine which enables them to make the crown or onlay on the spot, which means that all can be done during one office visit. It really can't get more convenient than that.

In some cases, when the dental fillings are in good condition and removing them poses more of a risk than keeping them in, it may be best to leave them in. This is something to be discussed with the respective medical personnel, which will take into account your personal health and the condition of your teeth.

The Removal of Mercury Fillings

Guidelines for Dentists: Recommended procedures for the safe removal of mercury amalgam fillings

What to expect after removal

Practitioners may recommend that patients with amalgam fillings have them removed, if the patients are experiencing many of the symptoms associated with chronic mercury toxicity; or if they are suffering from diseases related to chronic mercury poisoning, allergies or immune system dysfunction. It is also recommended to remove mercury fillings if patients are suffering from neurological diseases.

Cancer specialists, specifically, may recommend the removal of these toxic fillings to give the patients' immune system the best chance of fighting the cancer.

Some chiropractors and alternative health doctors are also aware of the impact of mercury toxicity on our health and may suggest a complete removal of amalgams as a preventative measure.

All fillings need to be replaced eventually as they don't last forever. When a tooth with an amalgam filling breaks or cracks, you run the risk of getting poisoned - potentially resulting in an emergency situation. 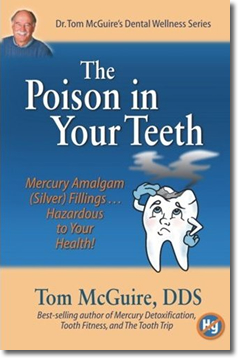 Unprotected removal of amalgam dental fillings can expose patients to toxic mercury vapor and amalgam particulate matter that pose significant risks to your health. Therefore, amalgam dental fillings should not be worked on or removed during routine dental procedures. Special precautions need to be taken to limit any exposure, and this usually requires a biological dentist who is experienced in this area and practices all necessary precautions.

There are numerous cases where mercury poisoning occurred during the removal of amalgam fillings by medical personnel that didn't follow the proper procedures -- either out of neglect or ignorance. You also want to make sure that cracked fillings that need to be replaced are not replaced with other amalgam fillings.

Something else to consider: When it's time to replace a crown, a regular dentist may use material that could react with the mercury filling, potentially allowing the mercury to leak out of the crowned tooth. In any of these cases, it's best to work with Biological, Mercury-free Dentists, whose mercury-free fillings use composite materials made from porcelain.

The removal procedure poses a particular risk to pregnant and nursing mothers, patients who have existing health issues related to mercury, allergies, or immune system problems. Special precautions need to be taken should the removal of these fillings be necessary (to be discussed with your mercury-experienced physician).

Before removal of these fillings, ask your holistic dentist what protocols he or she will be following. The International Academy of Oral Medicine and Toxicology (IAOMT) has established a protocol for dentists.

If you don't have a mercury-free / holistic dentist yet, you can find one via this webpage. Once you have a dentist, you may want to ask him or her for a biocompatibility testing of dental materials, before replacing the mercury fillings. Many will have these kits in their offices.

Before attempting to remove mercury fillings, you should consult with a medical doctor -- it would have to be one who understands mercury toxicity. The following resources will help you find someone in your area:

The physician will evaluate how your body is handling the poison it has already absorbed.  It is important to verify whether your kidneys can handle the extra mercury burden that will occur during and after the amalgam removal.  Part of this process may be a hair and blood analysis, and a detailed symptom history.

A proper detoxification protocol begins with a nutritional program and the necessary supplementation. Your holistic dentist or physician may recommend you undergo a whole-foods, high-fiber vegan diet for a week before your appointment to cleanse the body of accumulated heavy metals. Part of the pre-removal preparations might include vitamins, minerals, and other supplements as well as homeopathic remedies that will build up your immune system and assist with the removal of mercury from your system.

Your physician may ask you take specific amounts of antioxidants, such as Vitamins A, B complex, C, E, selenium, zinc picolinate, magnesium and CoEnzyme Q-10; as well as chelating agents, such as Kyrolic garlic, vitamin C and chlorella. These chelating agents will reduce your chances of being further poisoned or becoming poisoned as a result of the procedure.

High levels of sulfur-containing foods, such as egg yolks, and supplements such as glutathione and selenium, are critically important as these binding agents are constantly lost in urine, bowel movements and sweat, and must be replenished on a daily basis.

Often a combination of homeopathic remedies are used as a way to gently assist the organs, especially the liver and kidneys, and for helping to pull dental metals out of the tissues, and to help them exit from the body. Herbs for proper detoxification include Solidago, which is a good kidney herb, and Silymarin, which is excellent for the liver.

The following vitamins and minerals have been shown in the scientific literature to be beneficial to the mercury toxic patient.

It is important to get all of the mercury out as quickly as possible; and antioxidants help to minimize the impact of mercury entering the bloodstream.  Upon completion of the amalgam removal, some patients may be referred to a physician for intravenous Vitamin C.

The Removal of Mercury Fillings

Unless there is a reason to do otherwise (like acute toxicity), it's best to replace the amalgam slowly over a course of time, applying all the safety measures recommended by the IAOMT ( IAOMT.org) - the procedures of which any good biological dentist should be well trained in.

Another reason to have one tooth done at a time is to make sure that you are happy with the end results. You don't just want a doctor who practices safety when removing toxic metals from your mouth, but you also want one whose restorations look good and fit without leaks. Having initially done one or two teeth will give you an idea as to the dentists' overall competencies is concerned - before proceeding to the rest of your mouth.

Click here to learn more about the procedures your dentist is likely to follow while removing your mercury filling.

What to expect after removal

It is important to note that mercury levels in the blood usually increases within ~ 48 hours and then declines exponentially - faster at first and then more slowly over about 3 months. During this time, patients may experience increased symptoms associated with mercury toxicity. That increased blood level of mercury indicates an actual decrease of mercury in the whole body as the mercury is expelled from the muscles and organs into the blood -- which is actually a good thing.

Once the constant low-level source of mercury is removed, the body begins the process of detoxification. It's important to ensure that the released mercury leaves the body rapidly and completely.  The longer the process is, the more stressful it is for the patient both mentally and physically.

Patients that had their amalgam fillings removed showed 50-75% reduction in mercury levels a year later.

Recommended procedures for the safe removal of mercury amalgam fillings