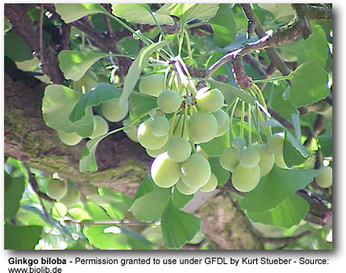 Use Ginkgo Biloba to Starve Off Alzheimer's and Dementia
by: Rudy Silva

Dementia, Alzheimer's, and other mental diseases are accelerated by:

The lack of blood to the brain is caused by arteriosclerosis - plack buildup along the arteries causing them to narrow. Arteriosclerosis occurs when you have a diet that causes damage to the artery walls promoting cholesterol and other minerals and nutrients to patch up the damage. Over time, as this patching continues, this area will become narrow and in some case blocks the flow of blood.

As early as possible it is always recommended that you research what a health diet is. Find a diet that will minimize damage and inflammation in your body. Starting a healthy diet at any age is helpful but the sooner you start the better.

Ginkgo Biloba has been found effective in increasing the circulation of blood throughout the body including the brain. When this happens more blood moves into the brain and supplies it with the nutrients in the blood.

Using Ginkgo Biloba for dementia and Alzheimer's has show to slow down, delay, and even reverse these conditions in some cases. Use of Ginkgo Biloba is more effective when used in the early signs of senility, dementia, or Alzheimer's.

If Alzheimer's is well progressed, Ginkgo may have only a slight value. But when Alzheimer's and other dementia issue are due arteriosclerosis or lack of blood to the brain, then Ginkgo may provide some relief and improvement in these conditions.

Here is the type of Ginkgo you should use:

Results in using Ginkgo Biloba can take from 3 - 12 weeks. It is a safe herb and may only have slight side effects such as headaches and dizziness, but these will disappear as you continue to use it.