A strong immune system defends your body against infections of many kinds, including the common cold up to serious diseases, such as cancer

This spice is found in every yellow curry, and its golden color is the result of curcumin, a polyphenol with strong cold and flu-fighting properties.

A 2008 study published in Biochemical and Biophysical Research Communications found that curcumin prevents some immune cells from responding to stimulants and so has modulating and anti-inflammatory effects. Tumeric has antiseptic qualities when applied topically and often is used on cuts and burns.

The immune-boosting properties of garlic come from its sulfur-containing compounds, which are

effective against bacterial, viral, fungal and parasitic infections; enhance the immune system and have anti-tumor and antioxidant features.

This European herb is popular in Mexican and Mediterranean cuisines; and is usually added to flavor spaghetti sauce or pizza. Oregano is one of the most nutritioussubstances on earth, with

This herb has strong anti-bacterial properties, including having shown effectiveness against Pseudomonas aeruginosa and Staphylococcus aureus bacteria. Researchers found oregano to be more effective against Giardia than a commonly used prescription drug. In laboratory studies, oregano has demonstrated stronger anti-oxidant capacity than either of the two synthetic anti-oxidants commonly added to processed food - BHT (butylated hydroxytoluene) and BHA (butylated bydroxyanisole).

Bell peppers are a good source of phytochemicals as well as beta carotenes and vitamin C (particularly red bell peppers). Research has shown that increasing vitamin C intake can reduce the length of time cold symptoms last as well as reduce the severity of those symptoms.

Tea is rich in plant antioxidants (polyphenols) and other chemicals that can help protect the body against cold or flu. Some studies highlight a compound called epigallocatechin gallate ( EGCG) which have been shown to inhibit the growth of cancer cells without harming healthy tissues.

Pumpkins are rich in beta carotene, a nutrient that the body breaksdown to make vitamin A. Vitamin A helps 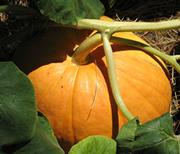 strengthen the immune system and also aids in cancer prevention. Research suggests that vitamin A may help keep the respiratory system healthy, which is particularly helpful when you have a cold or the flu.

However, experts caution against too much vitamin A. Because it is fat-soluble, excess vitamin A can be stored in the body's fat cells and large quantities can be toxic. Eating foods naturally rich in beta-carotene may be safer than taking a vitamin A supplements.

Ginger is often recommended as a tea or a bath for those with a cold or flu because it is helpful in increasing sweat production, which may help us get rid of germs and toxins. Ginger has also been shown to reduce nausea and vomiting.

*Note: Ginger can decrease blood clotting and should not be taken by people with bleeding disorders.

Mushrooms (shiitake, maitake and reishi) are remarkable immune boosters - according to Jonny Bowden, Ph.D., C.N.S., author of "The 150 Healthiest Foods on Earth."

Not only are they rich in compounds that fortify white blood cells, they also neutralize environmental toxins. In fact, they are used in Asia as an adjunct to chemotherapy. Dr. Bowden also points out that mushrooms lower bad cholesterol and regulate blood sugar.

Seafood and lean meats generally have a high zinc content. Zinc enhances the function of helper T cells, which are important in identifying foreign antigens and alerting other cells of the immune system to invaders. Even a mild zinc deficiency can have adverse effects on the immune system, particularly in children and the elderly. But too much zinc can be toxic.

Lean meats such as beef, chicken and seafood are the best sources of zinc. Good sources of zinc for vegetarians would be pumpkin seeds, beans and mineral-fortified cereals.

Information contained on this website is provided as general reference only. For application to specific circumstances, professional advice should be sought. Please review Disclaimer