For education only, consult a healthcare practitioner for any health problems ... Disclaimer. 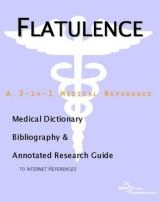 The symptoms of gas can include abdominal discomfort, belching, flatulence, and other symptoms.

Hippocrates has been quoted as having said, "Passing gas is necessary to well-being." What was true in ancient Greece still holds true today. Flatulence -- the passage of intestinal gas -- is a normal function of the human body, something each of us does between 10 and 20 times daily. But that doesn't make it any less awkward when it happens in the wrong place at the wrong time.

According to Daily Health News contributing medical editor Andrew L. Rubman, ND, gas is a natural byproduct that develops when normal, beneficial bacteria in the intestines act to break down undigested food particles. This gas is eventually released through the rectum, and most often it is odorless (or at least mild) and quiet. That's of little comfort, however, to those who suffer from chronic, noxious gas, which is almost inevitably accompanied by chronic social embarrassment. Dr. Rubman and I had a candid conversation about the causes of gas and how to control it.

The character of gas depends on what you eat and how you eat it, says Dr. Rubman, and it's not all the same. The inoffensive kind of harmless, odorless gas contains hydrogen, carbon dioxide, nitrogen, oxygen and sometimes methane. The more embarrassing variety contains byproducts of digestion, such as sulfur. Questions to ask yourself if you suffer from the embarrassing kind of intestinal gas are...

HOW TO TAKE A PASS ON GAS

I asked Dr. Rubman about popular over-the-counter remedies for flatulence, such as Beano and charcoal pills. He told me that Beano contains an enzyme that breaks down carbohydrates, while charcoal is widely known to absorb odors and toxins, including poisons, drugs and other undesirable substances that don't really belong in your body. He told me that while antidotes like these may temporarily correct the problem, products like Beano, charcoal and the simethicone surfactant-containing Gas-X fail to address the underlying cause of most flatulence -- diet. Fortunately, Dr. Rubman has a number of safe and natural tips for healthier eating. These include...

CHRONIC FLATULENCE: NOT A LAUGHING MATTER

Passing gas may be good for a laugh -- especially among schoolchildren -- but truthfully, chronic flatulence is no laughing matter. Flatulence can be a sign of irritable bowel syndrome or other bigger issues. If you suffer from persistent, noxious flatulence (especially when the odor extends to the breath, which happens in severe cases), schedule a visit with a physician specializing in digestion and GI diseases who can evaluate your problem and help you get your digestive tract back on the right track.