Plants that Detoxify the Air 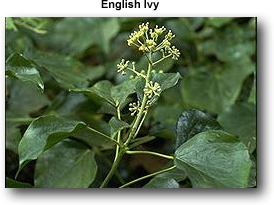 Hedera helix (species name from Ancient Greek "twist, turn"), also called Ivy, Common Ivy, or English Ivy is a species of ivy native to most of Europe and southwest Asia.

It is an evergreen climbing plant, growing to 20-30 m high where suitable surfaces (trees, cliffs, walls) are available, and also growing as ground cover where there are no vertical surfaces. It holds on to tree bark and rock by means of short adhesive rootlets. The helix part of the name refers to where there are spirals in the leaves.

The leaves are alternate, 4-8 cm long, with a 3-10 cm long petiole; they are of two types, with palmately five-lobed juvenile leaves on creeping and climbing stems, and unlobed cordate adult leaves on fertile flowering stems exposed to full sun, usually high in the crowns of trees or the top of rock faces. The flowers are produced from late summer until late autumn, individually small, in 3-5 cm diameter umbels, greenish-yellow, and very rich in nectar, an important late food source for bees and other insects; the fruit are small black berries ripening in late winter, and are an important food for many birds, though poisonous to humans. The seeds are dispersed by birds eating the fruit.

It is widely cultivated as an ornamental plant, with numerous cultivars selected for such traits as yellow, variegated or deeply lobed leaves, purple stems, and slow, dwarfed growth.

In North America (where it is often known as English Ivy), it has become naturalised and is sometimes considered an invasive species, especially in the Pacific Northwest where the climate is similar to that in its native area.