Coconut oil is nature’s richest source of MCTs.  Not only do MCTs raise the body’s metabolism leading to weight loss, but they have special health-giving properties as well. The most predominant MCT in coconut oil, for example, is lauric acid. Lipid researcher Dr. Jon Kabara states “Never before in the history of man is it so important to emphasize the value of Lauric Oils. The medium-chain fats in coconut oil are similar to fats in mother’s milk and have similar nutriceutical effects. Modern research has now found a common link between these two natural health products----their fat or lipid content. The medium chain fatty acids and monoglycerides found primarily in coconut oil and mother’s milk have miraculous healing power.” Outside of a human mother’s breast milk, coconut oil is nature’s most abundant source of lauric acid and medium chain fatty acids.

Scientific studies have reported that the fatty acids from MCTs in coconut oil are not easily converted into stored triglycerides, and that MCTs cannot be readily used by the body to make larger fat molecules. One animal feeding study evaluated body weight and fat storage for three different diets--low-fat diet, high-fat diet containing long-chain triglycerides (LCTs), and a high-fat diet containing MCTs.  All animals were fed the selected diets for a period of 44 days.  At the end of that time, the low-fat diet group had stored an average of 0.47 grams of fat per day; the LCT group stored 0.48 grams/day, while the MCT group deposited only 0.19 grams of fat per day, a 60% reduction in the amount of fat stored.  The authors conclude that "the change from a low-fat diet to a MCT-diet is attended by a decrease in the body weight gain.”

In a human study, researchers compared the metabolic effects of 400-calorie meals of MCTs and LCTs by measuring metabolic rates prior to and six hours following the test meals.  The results showed that the MCT-containing meals caused an average 12 percent increase in basal metabolic rate as compared with a 4 percent increase with the LCT-containing meal.  The authors concluded that replacing dietary fats with MCTs could "over long periods of time produce weight loss even in the absence of reduced intake." 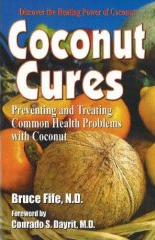 Dr. Bruce Fife (author of the "Coconut Cures" book featured to the right - a valued reference book that I own) states that the coconut is one of the best natural defenses we have against the flu.

Initial trials have confirmed that coconut oil does have an anti-viral effect and can beneficially reduce the viral load of HIV patients", University of the Philippines' Emeritus professor of pharmocology Dr. Conrato S. Dayrit said.

A minimum of 50 ml of coconut oil would contain 20 to 25 grams of lauric acid, which indicates that the oil is metabolized in the body to release monolaurin which is an antibiotic and an anti-viral agent. Among the saturated fatty acids, lauric acid has the maximum anti-viral activity, he said. Based on this research, the first clinical trial using monolaurin as monotherapy on some of the HIV patients was conducted recently. Dr. Dayrit's conclusions after the study: "This initial trial confirmed the anecdotal reports that coconut oil does have an anti-viral effect and can beneficially reduce the viral load of HIV patients. The positive anti-viral action was seen not only with the monoglyceride of lauric acid but with coconut oil itself. This indicates that coconut oil is metabolized to monoglyceride forms of C-8, C-10, C- 12 to which it must owe its anti-pathogenic activity."

On July 19, 1995, Dr. Mary Enig, noted biochemist and nutritionist, was quoted in an article published in The HINDU, India's National Newspaper as stating that coconut oil is converted by the body into "Monolaurin" a fatty acid with anti-viral properties that might be useful in the treatment of AIDS. The staff reporter for The HINDU wrote about Enig's presentation at a press conference in Kochi and wrote the following:

"There was an instance in the US in which an infant tested HIV positive had become HIV negative. That it was fed with an infant formula with a high coconut oil content gains significance in this context and at present an effort was on to find out how the 'viral load' of an HIV infected baby came down when fed a diet that helped in the generation of Monolaurin in the body."

The secret of many renowned hair dressers is coconut oil, and it is used in many commercial products -- however, the ingredients are likely to be inferior to the organic, expeller-expressed, extra virgin coconut oil that you can get at better health stores or online. However, Noel made this recommendation:

CHEAP COCONUT OIL SOURCES
Noel from Georgetown, Texas writes: "If you're on a budget (aren't we all) I have found a TWO POUND tub of Coconut Oil at WAL-MART for $2.82. The brand is LouAnn and it is in the aisle with baking supplies and oils. No need to buy that expensive stuff at the health food store."

The richness and highly moisturizing properties of coconut oil are said to promote shine, keep hair from turning gray and, believe it or not, are said to help sparse hair grow thicker and fuller - especially if a few drops of Rosemary Essential Oil are added, which increased blood flow in the scalp. The oil also helps repair damaged hair, offering essential proteins to strengthen and nourish it.

A hot coconut oil scalp massage once a week is rumored to be the secret of the luxurious hair of Indian women. Follow these steps to do your own treatment at home:

For a lip balm, use coconut butter on its own, or add peppermint or spearmint oil (organic Essential oils)

Dottie provided the following formulation: "1/3 Oil (i.e., Almond), 1/3 Beeswax, 1/3 Butter or Coconut Oil. You can desolve Stevia in the Coconut Oil for a "sweet taste". Do make sure that the Stevia is dissolved before adding it though, or you will get a 'grainy feeling'." My own tip: add a couple of drops of peppermint essential oil for a nice taste.

GreenAndHealthy.Info strives to maintain accurate and up-to-date information; however, mistakes do happen. If you would like to correct or update any of the information, please send us an e-mail. THANK YOU!!