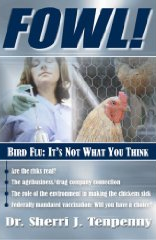 Mosquitoes, ticks and other biting insects can transmit several diseases to mammals and birds. Click here for information on controlling mosquitoes.

The bird flu, also known as avian influenza, is caused by a very dangerous strain of the virus H5N1, which has not yet been diagnosed as an epidemic in the U.S.

The virus is spread in the secretions of infected birds, so owners should take every precaution to prevent birds from exposure to oral or nasal secretions or the droppings of wild birds. Outbreaks appear to coincide with rainy seasons and the proliferation of mosquitos. Mosquito nettings over outside enclosures are recommended.

Preventing or Curing the Incurable - Cancer, Infections and Toxin Overload - with Vitamin C!

This disease truly worries me -- as it would any bird lover. Yes, there is the potential of a huge health problem for us humans. Rumors are that this disease was first developed in a laboratory; then again, poor housekeeping practices combined with crowded cages are known to cause disease pathogens to mutate into more deadly and antibiotic-resistant entities.

What is happening right now is that entire flocks are slaughtered over this in - what I have seen - the most inhumane way. Live birds simply thrown into trash cans - right on top of each other! Very inhumane. I understand the concern about human lives, but what distinguishes us from animals, supposingly, is our ability to show compassion that should not only extend to other humans but to all living creatures. I fail to understand, why the disposal of infected stock can't be done in a more compassionate, "humane" manner. Why not start by passing laws against crowding animals into confined spaces under poor sanitary conditions. This alone will be a great start at reducing animal-to-animal as well as animal-human infection.

For your information, I have enclosed below informative web links, as well as a couple of articles on this virus.

Avian Flu Not a Danger for North American Bird Watchers

Because of media attention about avian flu, the Cornell Lab of Ornithology has received numerous inquiries from people who are worried about the possible danger of avian flu in the United States. Currently, avian flu is not a danger for people who watch or feed birds in North America.

Since January 2004, the known human cases of avian flu have all occurred in Southeast Asia. Almost all of these infections were contracted by people who handle chickens. Migratory waterfowl and shorebirds can carry avian flu; infected birds have been found in Mongolia, Kazakhstan and Russia.

However, according to Alfonso Torres of Cornell's College of Veterinary Medicine, "When experts look at the maps of the areas affected by avian influenza in Asia and they look at the flying pathways of migratory waterfowl, there is not an overlap. Waterfowl are not the culprit for what is happening in Asia."

Why are people worried? One concern is that this particular virus could mutate and become more contagious, possibly spreading from person to person. Another concern is that the flu could be imported into this country through infected poultry. Public health officials are already working to ensure that this doesn't happen.

The United States Fish and Wildlife Service recently launched a web site entitled Avian Influenza in Wild Birds--Sources of Information. This educational document can be viewed at http://migratorybirds.fws.gov.

When I hear a report from the government stating

that a new virus will sweep the planet and kill millions I think of the great Swine Flu fiasco and the SARS fizzle. We  heard the same warning with both and it turned out to be much ado about nothing. What concerns me is the fact that the vaccine manufacturing giants are sitting in the White House licking their chops at a chance to supply the entire world with a new flu vaccine- billions in sales. It may be that these viruses are being manufactured in a Chinese military laboratory, since the SARS virus first appeared in a university setting, not a poverty-stricken farm. Analysis of the virus's genetics was highly suggestive of this scenario. The pattern is always the same. Next it goes to Vietnam and then works it way to the West. It is also important to remember that the high mortality rates being quoted, some 70% in Vietnam, occur among poorly nutritious peasants.

We have seen this throughout history. The great flu pandemic of 1918 occurred on the heels of WW I, at a time of massive malnutrition. One of the reasons we have not seen a repeat of such a massive pandemic is that most Westerners are more nutritious than previously.

One way to protect yourselves is to keep some beta-glucan (beta-1,3/1,6-glucan) around the house.  This is a powerful immune stimulant that specifically enhances cellular immunity, that is, the immunity that kills viruses.  My experience is that it will overcome most common viruses; certainly better than a vaccine. Considerable evidence indicates that high doses of buffered vitamin C, selenium, vitamin E, the carotenoids and zinc, along with the other vitamins and minerals dramatically improves one's immune system and hence, protection against these epidemics